Prayer Is Your Weapon! 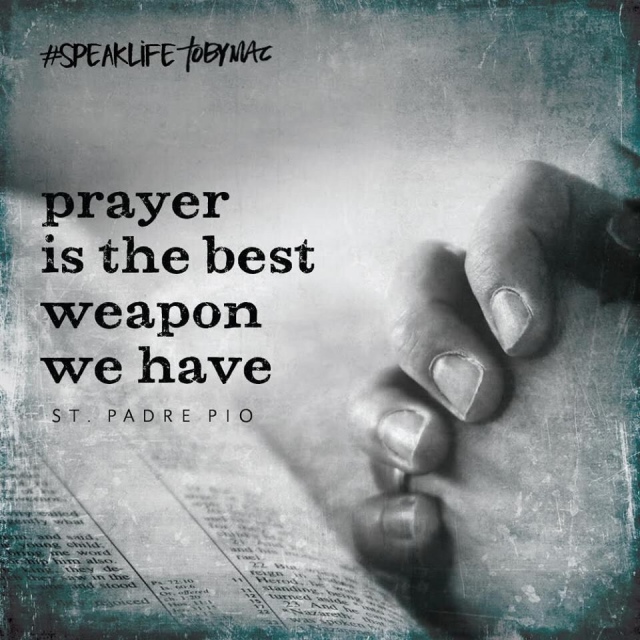 Martin Luther said, “To be a Christian without prayer is no more possible than to be alive without breathing.” There is nothing more powerful than a praying faith believing Christian and as such we should never should not underestimate the power of prayer. James 5:16-18 declares, “…The prayer of a righteous man is powerful and effective. Elijah was a man just like us. He prayed earnestly that it would not rain, and it did not rain on the land for three and a half years. Again he prayed, and the heavens gave rain, and the earth produced its crops.” Praying is communicating with God. Simply put, prayer is talking to God. Prayer is the weapon that “have divine power to demolish strongholds. We demolish arguments and every pretension that sets itself up against the knowledge of God, and we take captive every thought to make it obedient to Christ.”- 2 Corinthians 10: 4-5. Look at it this way, prayer is the key that unlocks and activates God’s power, peace and provisions in our lives. Philippians 4:6-7 says, “Do not be anxious about anything, but in everything, by prayer and petition, with thanksgiving, present your requests to God. And the peace of God, which transcends all understanding, will guard your hearts and your minds in Christ Jesus.” So the question is not what you got in your wallet rather who are you speaking to in your prayer room! Do you really believe in the power of prayer? Max Lucado said, “Our prayers may be awkward. Our attempts may be feeble. But since the power of prayer is in the one who hears it and not in the one who says it, our prayers do make a difference.”

#4GIVEN ministries is a devotional blog written to empower, encourage, and equip believers and unbelievers. We sincerely hope and pray that every reader and fellow blogger walks always with inspiration in their hearts and a fire in their belly after they read one of our inspiring devotionals. The mission is to make Christ known and to remind believers and unbelievers they are never too far gone for God to heal, deliver, and set free!
View all posts by #4GIVEN →
This entry was posted in Ministry and tagged faith, forgiven, forgiveness, freedom, God, grace, humility, Jesus, love, power, prayer, prayer room, spiritual warfare, victory, war room. Bookmark the permalink.